The role of fire in human evolution

A study in cognitive evolution shows that fire has played a significant role in the development of the human mind as we know it today.

Humans are instinctively attracted to fire. It creates a feeling of comfort, and when we gather around the dancing flames, something magic happens, and it can have a hypnotic effect on children as well as adults.

However, it is not without a reason that we experience this attraction to fire. Throughout thousands of years, fire has had a protective and warming effect on humans. Originally, fire worked as a source of light to keep predators at a distance, and it gave us an opportunity to cook and keep warm. So, when we light fires today, we experience a feeling of comfort and intimacy, and the fire often becomes a focal point for social interaction.

According to a study in cognitive evolution, fire has not only had a practical function throughout time. It has played an important role in the development of the human brain. Psychologist Frederik L. Coolidge from University of Colorado explains that the creation of artificial light from the fire changed our sleep pattern.
As the fire kept predators away, it was safer for humans to indulge in more REM sleep, in which dreams are more vivid and the brain strengthens long-term “procedural memories,” which allow humans to retain skills and repeat previously learned tasks. Modern humans spend 25 percent of sleep in REM, compared with up to 15 percent for apes and monkeys, which has improved our ability to learn multistep tasks such as tool manufacturing.

The ability to think about multiple things at the same time

Moreover, there is an indication that fire has strengthened our ability to think about several things at the same time and related them to each other, which enables us to imagine and execute complicated plans. According to another psychologist, Matt Rossano from Southeastern Louisiana University, small social groups achieved this mental state some 100,000 years ago around the fire.

The fire has made it possible for us to solve the tasks that we are facing, and thereby, it has played an important role in the development of the human mind as we know it today.

The study has examined cognitive evolution – a field that brings together psychology, anthropology, neuroscience and genetics. Source: Smithsonian.com.

More about Lighting a fire

Firewood is dry when its moisture content is below 18 %

How to light a fire correctly in your wood burning stove

It's important to light a fire in your wood burning stove correctly. This way you'll make the most of your firewood and you'll protect the environment as much as possible.

Maintenance of your wood burning stove

Here you'll find a basic guide for maintaining your wood burning stove. A good and regular maintenance of the wood burning stove will ensure you a better firing process and a stove that will last longer. Cleaning doesn't have to take that long and the more often you do it, the easier it'll be to clean. 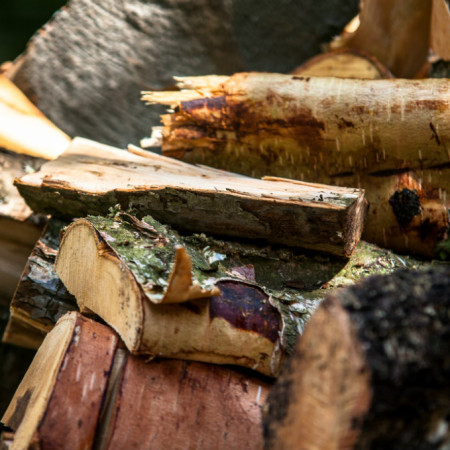 Efficiency - make the most of your firewood