It’s good to know how important it is to you and the environment that you light a fire in a wood burning stove correctly. The German Technologie- und Förderzentrum (TFZ), which is an institution under the Ministry of Food, Agriculture and Forestry in Bavaria, has conducted a series of tests on:

TIP: Chop your firewood so each log has approximately the same size as a standard bottle of wine.

The moisture content in your firewood must not be above 18 %

The test has been done in a stove.

You should always fire with wood which has a moisture content below 18% if you want to obtain the highest efficiency. As soon as the wood’s moisture content exceeds 18 %, the particle emissions increase drastically.

Further reading: Efficiency – make the most of your firewood

The test was done in a wood burning stove. Fuel: 7×7 centimetres beech wood.

The graph below clearly shows that the particle emissions increase if you fire with firewood which has a high moisture content.

Use logs which have an appropriate size

– and make the most of your money

This test shows how much the size of the logs matters when it comes to your wood burning stove’s efficiency which is it’s ability to exploit the firewood as much as possible to create heat.

The test was done in a stove. Fuel: Beech wood. The length of the logs: 33 centimetres. Fuel load: 4.5 kilogram.

If the logs you use to fire with are too big, you’ll reduce the efficiency while logs too small can damage the environment.

Read more about the size of the logs and which impact the size has on particle and carbon dioxide emissions below.

In this test, they fired five times with 2.5 kilogram of firewood with logs of varying sizes.

The test was made in a wood burning stove. Fuel: Beech wood without bark. Fuel load: 2.5 kilograms. Moisture content: 15.5 %.

The size of the logs matters in the combustion process

The test shows that the most ideal log size is 7x7x25 centimetres if you want to minimise the particle and carbon dixode emissions during combustion.

If you use logs that are too small, you won’t get complete combustion. That’s because there won’t be enough oxygen to burn the gases which the firewood releases. The pollution happens when the gases disappear up the chimney as smoke instead of being transformed into heat in your house.

If you fire with logs that are too big, you’ll risk that the temperature in the stove will be too low.

Use neither too little nor too much firewood

This test was done to establish how big the amount of firewood should be when firing in order to minimise particle and carbon dioxide emissions.

The test was done in a wood burning stove. Fuel: Beech wood without bark. The size of the logs: 5x5x25 (the amount of logs is increased for each test). The moisture content: about 14 %.

Use neither too little nor too much firewood when firing.

The graph shows that the lowest particle and carbon dioxide emissions happen when the amount of firewood is 0.92 til 1.75 kilogram per firing.

The graph also shows that you should be careful not to put neither too much nor too little firewood in your wood burning stove when you fire.

You can find more information on the TFZ tests here

Logging, chopping and stacking wood are parts of a job many people care about. Working with wood has a practical goal which will benefit the entire family. Here you will find many pieces of advice on handling wood - from the forest and until it is in your wood burning stove.

How to Check Whether Your Firewood Is Dry

It's easy to assess how moist a piece of firewood is. In this article you'll learn four easy ways to determine the moisture content of your firewood. 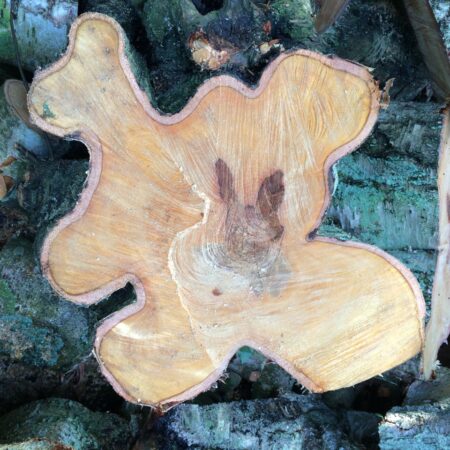 Which type of wood should you choose for firewood?